by The Bureau Of Atomic Tourism 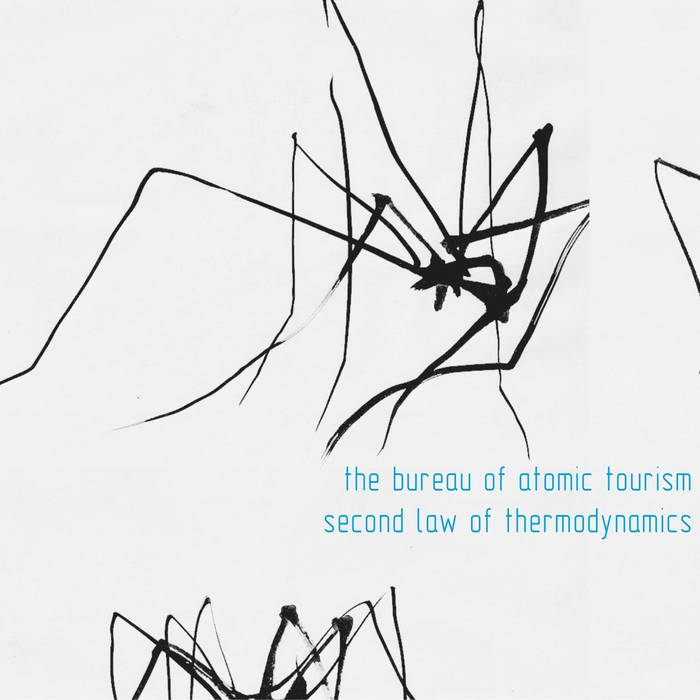 ORT004: The Bureau Of Atomic Tourism / Second Law Of Thermodynamics

Continuing to explore the Off association with Rat records (see here), this new release is by The Bureau Of Atomic Tourism - aka BOAT-, a fabulous sexet of stars composed by Andrew d'Angelo (bio) on sax, Nate Wooley (bio) on trumpet, Marc Ducret (bio) on Guitar, Trevor Dunn (bio) on bass, Teun Verbruggen (bio) on drums and Jozef Dumoulin (bio) on fender rhodes.
This is a live recording of a fabulous gig played at The Paradox in Tilburg-Holland on the 16th of November 2011 captured by Dieter Claeys, then mixed and mastered by Richard Comte in January 2013.

The musicians of the Bureau of Atomic Tourism — aka BOAT — were assembled by Belgian drummer Teun Verbruggen for Antwerp's Follow the Sound Festival in November 2011. Several days after the festival gig, BOAT recorded their 2013 debut album, Second Law of Thermodynamics, at a club show in Tilburg in The Netherlands, and by then they were truly firing on all cylinders. Verbruggen (Flat Earth Society, Jef Neve Trio, Too Noisy Fish) certainly surrounded himself with a top international lineup: bassist Trevor Dunn, reedman Andrew D'Angelo, and trumpeter Nate Wooley from the Brooklyn avant scene in the U.S.; and guitarist Marc Ducret and (Belgian-born) keyboardist Jozef Dumoulin from France. The music played by this transatlantic sextet is uncompromising, heavy on improvisation and with noisy electronics scattered about, and even some noisy electronics-type sounds created without electronics — thanks primarily to Wooley. Free improvisational opening track "Corollaries of the Decay Laws" finds D'Angelo (on bass clarinet) and Ducret screamingly intense; Dunn and Verbruggen maintain tumbling momentum while Dumoulin and Wooley, the latter playing long Miles-ish lines, chart out a middle ground — until D'Angelo's high-energy squeals push the trumpeter to move beyond tonality into pure static.
Verbruggen is ostensibly the bandleader but — at least for the set documented here — D'Angelo brought all the scores. His "BooBeeBooBeeBee" takes nearly four minutes to assemble itself into a messed-up pound-and-retreat theme — the midsection is a fine feature for the Ducret-Dunn-Verbruggen trio in halting escalation to an abrupt stop. D'Angelo also penned the two-part "Marthana," initially pairing the composer's woozy alto and Wooley's trumpet over a subdued dark ambient backing; Ducret's snaky guitar is soon surrounded by repetitive clicks, ticks, and pops that sound like a relatively gentle but deliberate pummeling is being delivered directly to the surface of your eardrums with the world's tiniest jackhammers. "Marthana, Pt. 2" builds into a fearsomely energetic and then fragmented jam after a Dumoulin keyboard feature, ultimately sputtering out before the reins are handed to Wooley, who again pushes beyond notes into sound and noise. A tumultuous improvisation with a physics formula title that translates as "The Average Defining the Generalized Force" stops on a dime and is immediately followed by D'Angelo's "Meg Nem Sa" (from Icelandic guitarist Hilmar Jensson's Tyft album of the same name), in which Verbruggen and Dunn lock into a tight but quick-shifting groove as Ducret, D'Angelo, and Wooley shoot fireworks across the top. The members of BOAT might be split between countries and even by an ocean, but on this souvenir from Tilburg they draw from a common improvisational language, seeming like they've played together for years. Perhaps the title Second Law of Thermodynamics is meant to convey that these sonic scientists don't comprise an isolated system as they channel and disperse their roiling energy. In any case, this album provides a jolt suggesting anything but a slow and steady decay into thermodynamic equilibrium.

Another one here from Neural magazine.
Tracklisting: